Since 1998, Pac/West has been retained by the Oregon Columbia Chapter of the National Electrical Contractors Association (NECA) and the International Brotherhood of Electrical Workers (IBEW) Local 48 for public relations, branding, marketing, outreach and media relations. This unique partnership trust is organized under the Taft-Hartley Act and is known as the Barnes Allison Labor Management Cooperative Committee (BALMCC).

Pac/West’s seasoned professionals have in-depth experience in working on marketing and outreach projects of all sizes. We know how to effectively gauge audience attitudes, perceptions and needs, as well as determine how best to reach them. To help NECA-IBEW reach its multiple target audience goals, Pac/West created four strategic initiatives: (1) Rebuilding Market Share; (2) Positioning with Elected Officials & Opinion Leaders; (3) Strengthening the Partnership; and (4) Recruiting the Best Workforce. 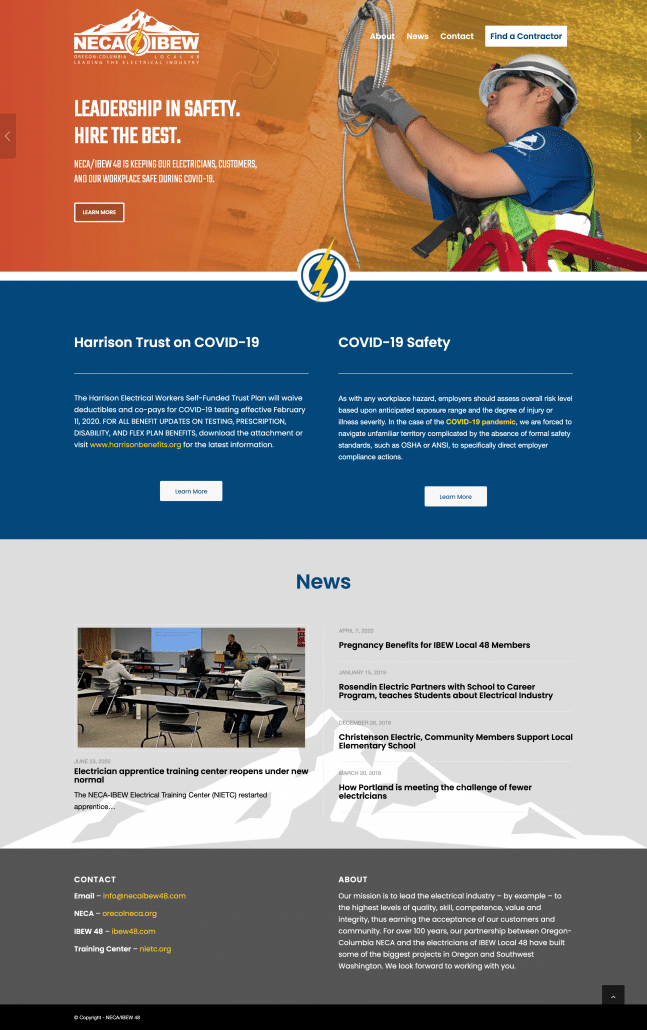 The web presence for NECA-IBEW, necaibew48.com, features a variety of content, including blog-style news, videos, and social media links. It also includes a contractor locator tool that integrates Google Maps software to connect potential customers with nearby electrical contractors. 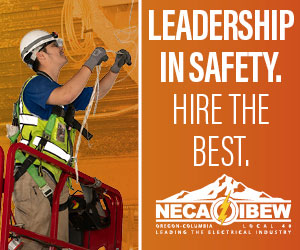 Pac/West has created both online and print ads with targeted messages based on industry research. NECA-IBEW digital ads utilize behavioral targeting and geo-fencing to ensure that the correct audience is reached. NECA-IBEW ads regularly surpass industry averages for click-through rates and impressions. As well, Pac/West produces native content articles, most recently about the partnership’s leadership surrounding health and safety precautions in response to COVID-19. 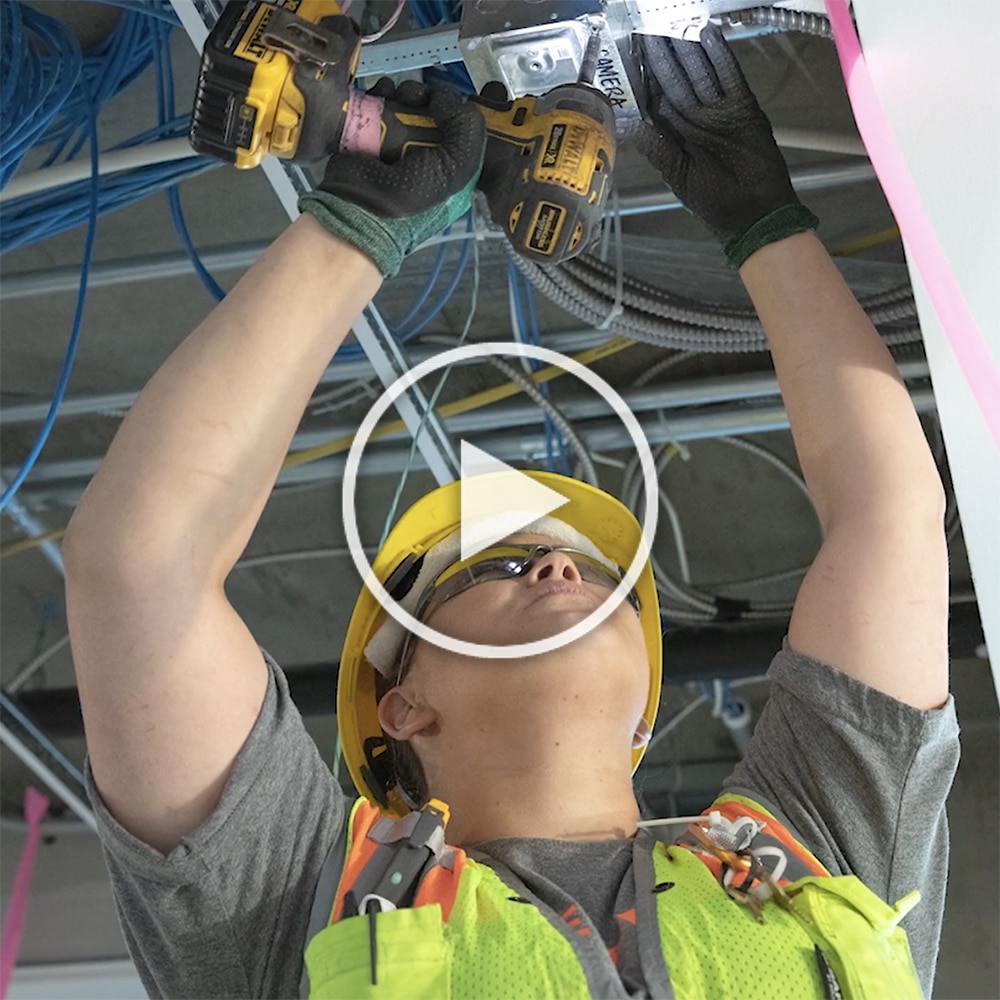 The partnership is a sponsor of the Portland-area Business Tribune electronic newsletter, a publication that includes lists of construction bid notices in the region.

Our award-winning, in-house creative and web development team works alongside our account managers to produce the highest quality work and achieve the maximum impact within the available budget. Our work also includes creative design of updated logos throughout the years. 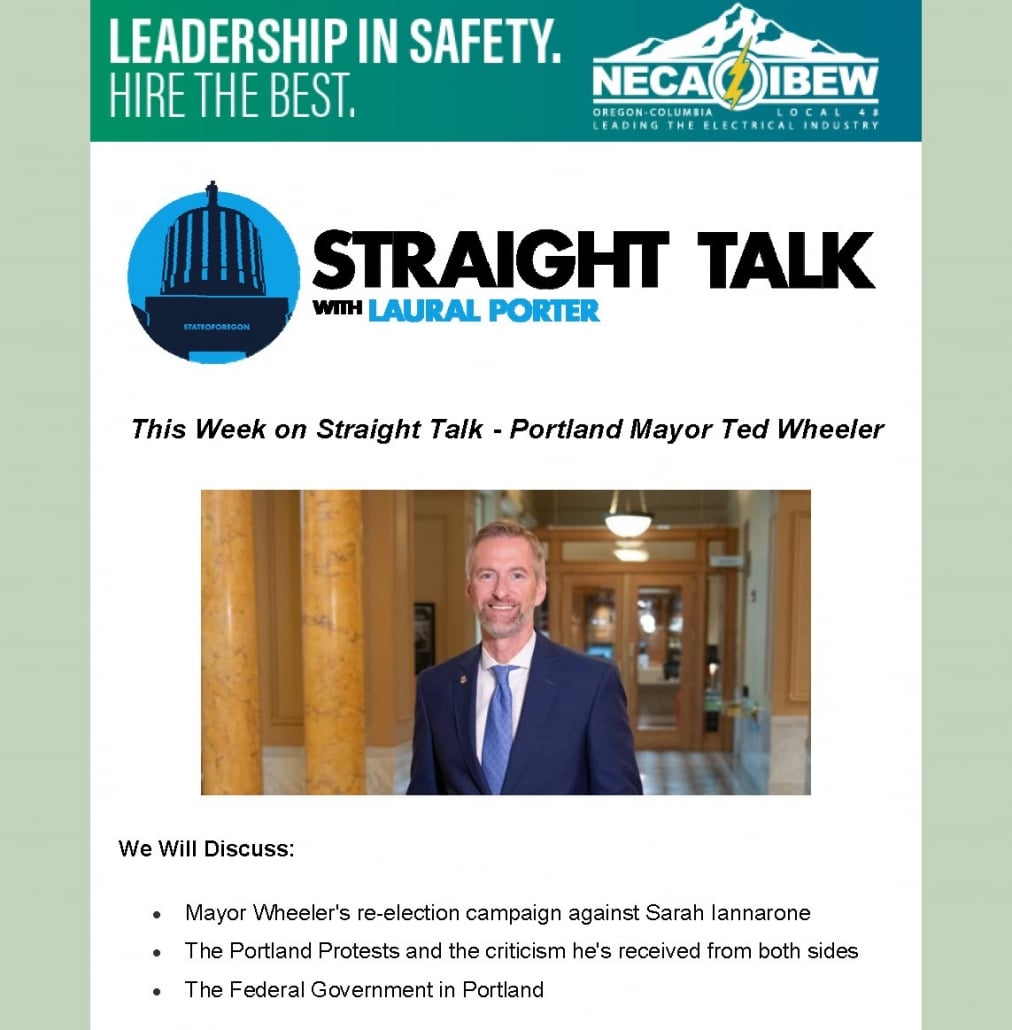 Pac/West secured NECA-IBEW as a sponsor of KGW’s Straight Talk, a weekly political talk show, for the purpose of reaching elected officials and opinion leaders. The show gives legislators and other influencers a stage to discuss their issues. The NECA-IBEW logo is displayed at every show and promotion, including on KGW’s website. Pac/West also sends out a weekly e-blast to promote the upcoming show to elected officials and opinion leaders. The partnership is also a sponsor of the Oregon Capitol Insider newsletter that is sent weekly to over 80,000 elected officials, opinion leaders and business owners across the state of Oregon.

To help foster good relationships between NECA and IBEW Local 48 members, Pac/West writes articles for monthly employee newsletters. These articles highlight member news and stories, provide educational materials and tips, and showcase the code of conduct that members follow. We also manage a partnership Facebook page that has over 3,600 followers.

Pac/West also manages the purchase and distribution of tickets to the local ice hockey team’s annual charity game that are provided free to NECA-IBEW members.

Pac/West has designed two main recruiting efforts for the NECA-IBEW partnership, the first to apprentices, and most recently to target journeymen. 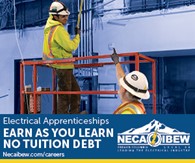 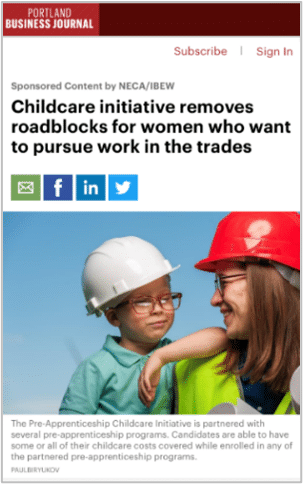 Native content articles were also part of the recruitment initiatives. Pac/West created a series of articles for the Portland Business Journal highlighting the experiences of women, minorities, and previously incarcerated people who had been through or were currently in NECA-IBEW apprenticeship program. Since childcare is one of the biggest barriers for women and minorities in the trades, these articles also featured the Pre-Apprenticeship Childcare Initiative and other services that make the field more inclusive and accessible. 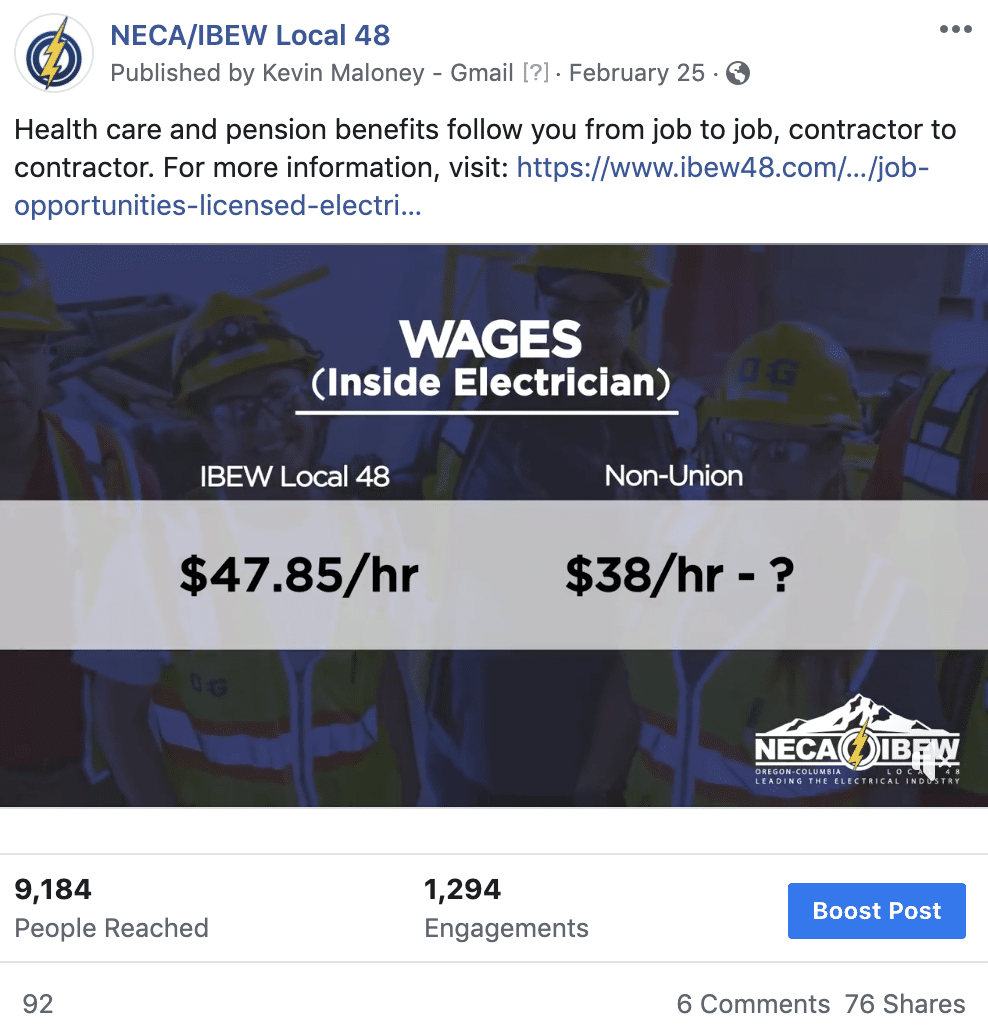 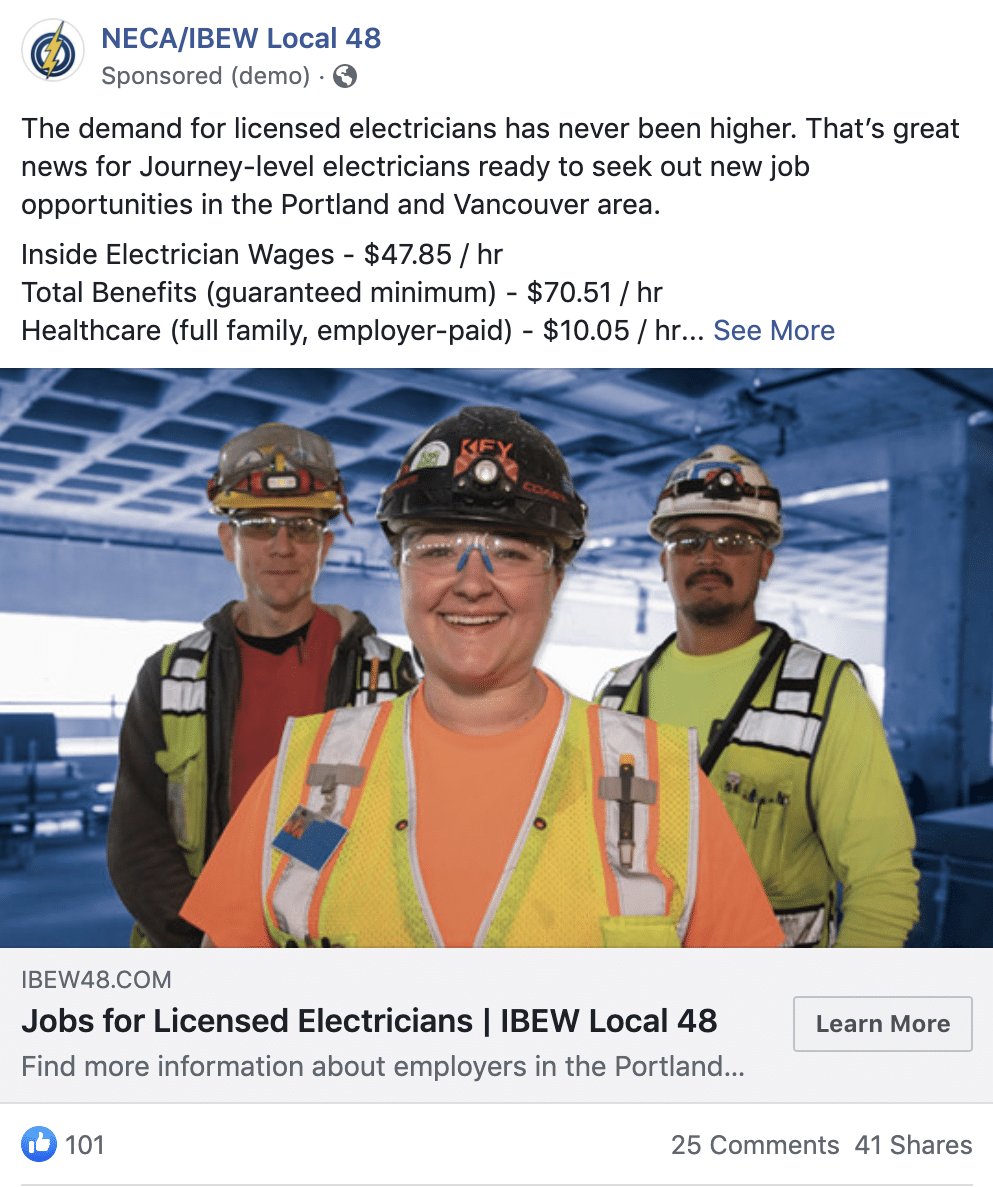 More recently, Pac/West coordinated with IBEW to reach out to licensed non-union electricians to convince them to join the union using recruitment ads on digital ad networks and Facebook.

Our video and image-based ads target non-union electricians in NW Oregon and SW Washington to inform that the IBEW’s wages and benefits are superior to non-union shops. Geofencing is used to target electricians in specific geographical areas, like non-union shops, supply houses and job sites. The ads then “follow” the user, meaning that even if that person leaves the job site (or other geofenced location), they can still be served the ad through various digital channels. When a user clicks on the ad, they are redirected to the “Jobs for Licensed Electricians” page at www.ibew48.com.

Since the campaign began, impressions have reached over 1.6 million and resulted in almost 5,000 clicks. Traffic to the IBEW landing page is also up 27%.

We also ran video ads on Facebook that targeted two groups: (1) users who clicked on an ad from the geofence campaign noted above, and (2) a list of new electrician licensees’ email addresses.

Conversion ads were used to motivate direct action. These ads are served to the same audience as the Facebook video but in a way to maximize users to click on the ad, but also complete a form once redirected to the IBEW 48 website, thus capturing their contact information. Conversion ads have resulted in several electricians signing up for more information on ibew48.com.

By reaching out to the best potential apprentices and journeymen, Pac/West is helping NECA-IBEW create a more dynamic workforce for the future.

Staying on Top of an Ever-Changing Industry

NECA-IBEW has been a long-time client of Pac/West. While technology has changed and the industry has changed, Pac/West has remained consistently present, adaptable, and cutting edge. Our deep bench and overlapping skill sets enable us to work both strategically and creatively to meet NECA-IBEW evolving needs. For over 22 years, our firm has delivered measurable results for their marketing and outreach efforts.