In 2013, the oil and natural gas industry in Colorado encountered significant opposition to development. Some residents began to believe false messaging from environmental activists. The industry had to educate Coloradans about not only its benefits, but the realities of its operational safety. Pac/West has served as the general consultant and lead strategist since this public education campaign began.

Since its inception, CRED has grown to eight member companies and has used state-of-the-art print, television, radio, digital, and in-person efforts to educate Coloradans about the positive attributes of the industry that has provided so much to the everyday good of all Coloradans.

CRED was created to help educate Coloradans about fracking’s energy, economic and environmental benefits. Even though the oil and natural gas industry has utilized fracking for more than 70 years, many Coloradans admit to not knowing or understanding what it involves.

In today’s emotionally charged political environment, it is challenging to use fact-based messaging in a way that will connect emotionally with Coloradans. Most Coloradans are not familiar with the operations and history of the oil and natural gas industry in the state. 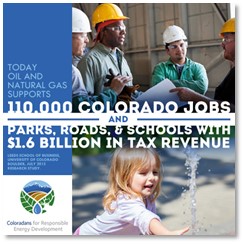 CRED uses research in all aspects of its message platform to ensure not only fact-based messaging but also maximum efficacy. It then uses that research to ensure that the correct people are targeted with these effective messaging.

Through traditional and digital media, and a community outreach program, which included going neighbor-to-neighbor, CRED was able to educate and inform Coloradans about the facts about fracking. This strategic move continues to move the public past the misleading, frightening sound bites, and towards CRED’s specific messages: the substantial economic benefits of fracking; energy independence; the fact that Colorado has some of the toughest regulations in the country; and the right of Coloradans to be free from unwarranted interference and control of their private property.

The alignment of CRED’s effort and the shift in tone in the media is both recognizable and undeniable. Through the various phases of its program, CRED educational efforts have moved the needle significantly.

Through CRED’s longstanding work in Colorado to educate the public, the oil and natural gas industry is now driving the message at a rate of two to one positive messaging. CRED continues to be the driver behind energy messaging in Colorado and rigorously meets and exceeds its goals on a daily basis by educating Coloradans and the importance of the oil and natural gas industry.